Today, computing engages a user’s senses of sight and hearing through video and audio devices whose effects the user must integrate in his or her mind.  Suppose that electronic media could offer users an active form of original information that would fully integrate sight and sound and add the sense of touch for the user experience.  Suppose that the person using information could interact physically with it.  This is the concept of claytronics, which is also known as programmable matter.  Through this medium, users would engage with information in realistic, 3-dimensional forms — represented in the immediacy of the user’s personal space. 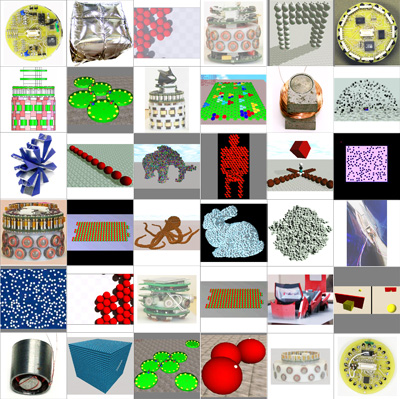 Creation of claytronics technology is the bold objective of Dr. Seth Goldstein, Dr. David Ricketts and researchers at Intel Research, Army Research Labs and Carnegie Mellon University, which combines nano-robotics and large-scale computing to create synthetic reality, a revolutionary, 3-dimensional display of information.  The vision behind this research is to provide users with tangible forms of electronic information that express the appearance and actions of original sources.

The objects created from programmable matter will be scalable to life size or larger.  They will be likewise reducible in scale. Such objects will be capable of continuous, 3-D motion.  Representations in programmable matter will offer to the end-user an experience that is indistinguishable from reality.  Claytronic representations will seem so real that users will experience the impression that they are dealing with the original object.

Claytronic emulation of the function, behavior and appearance of individuals, organisms and objects will fully mimic reality – and fulfill a well-known criterion for artificial intelligence formulated by the visionary mathematician and computer science pioneer Alan Turing.